The Marblehead Conservancy is about to embark on a new project at Lead Mills to enhance and continue the restoration work that has already been done.

In 2012 the Town of Marblehead and City of Salem acquired this property, rescuing it from commercial development. Remediation was done to address known lead contamination at the site. Then, to better understand its potential as an open conservation space, a study was carried out that outlined topography, soil composition, climate zones and other natural characteristics at the site. With the study’s findings in mind, the Conservancy undertook a huge task: converting this former contaminated site into a space that would include trees, shrubs, grasses and a wildflower meadow. While many hours of volunteer work on this task have been logged to date, and many positive changes have been made, more work remains to be done.

Five annual Earth Day / Arbor Day celebrations sponsored by the Conservancy have involved volunteers in the planting of several thousand square feet with native wildflower plugs. Getting these wildflowers to settle and proliferate has been a slow process and has included much trial and error. But progress has been made.

In the fall of 2019, the Conservancy decided to put a push on this conversion to a native wildflower meadow by seeking professional guidance from outside sources. An ad hoc Wildflower Committee was formed, chaired by Don Morgan and including Jody Howard, Nina Robertson, Mary Krull and Kathy Krathwohl. Consultants were solicited and evaluated. With input assistance from science teachers at Tower School, which has worked with the Conservancy on other projects, this new planning effort morphed into a native wildflower / native pollinator project with a focus not only on native wildflowers, but also the native pollinators they might draw.

As is well documented, honeybee populations are in sharp decline, resulting in serious challenges for produce growers nation-wide. Additionally, wild pollinators, a diverse and perhaps less well-known group, are also in decline.  They have suffered due to the disappearance of their natural habitats, monoculture farming, pesticides, predation from other insects, diseases, and more. It turns out that most efforts to restore pollination systems to date have focused on a few common bee and butterfly species, rather than on the range of wild pollinators needed for a healthy and resilient ecosystem. The Conservancy hopes to address this issue.

To this end, the Wildflower Committee recommended a consultant, and the Marblehead Conservancy has contracted with Evan Abramson of Landscape Interactions, a person with the expertise to suggest native plants that will draw in wild native pollinators. To restore a diverse population of native pollinators, a select species of native plants is needed. Evan will coordinate annual bee surveys and his suggestions with our planting over a three-year contracted period to see if our efforts are paying off. He will suggest adjustments as needed.

We plan to invite the public to help. As maintenance is key to the success of this project, weeding expertise would be especially welcomed! As an added educational benefit, Landscape Interactions will be available to teach a short seminar on pollinators, perhaps at a future ED/AD celebration. 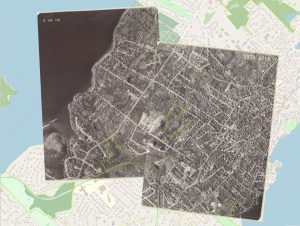 A special exhibit on the history of Marblehead’s conservation efforts was planned for April 2020 in Abbot Public Library’s Virginia A. Carten gallery.  Like many special events, our plans were disrupted by COVID.  While the exhibit will be rescheduled in the future, we wanted to share a couple of images and a video to give you a taste of what’s to come.

The exhibit will display a collection of aerial photographs, maps, and a video presentation showing natural open space conservation during the development of Marblehead.

Aerial photographs offer views of Marblehead before natural open space conservation began, as well as closer looks at some of the earliest conservation sites and surrounding areas. For closer inspection selected photographs have been overlaid on a current map of the town to help viewers locate the sites. When the exhibit takes place viewers will also see detailed historical information on all the publicly accessible natural open space conservation areas of the town showing how the areas were obtained, when, and from whom.

The aerial photos overlaid on a map shown on this web page highlight several  conservation areas.  See if you can spot Hawthorn Pond, Robinson and Jermyn Farms, Turner Woods, and a corner of Seaside Park.  Click on the aerial photo and map image above to see an enlarged version, then imagine what this image will look like when it is printed 4 ft. wide by 3 ft. high. Every open space will be similarly highlighted when the exhibit takes place.

Visit the Conservancy’s YouTube channel to watch a two minute animation that shows how Marblehead grew and filled in, starting in 1636 and ending in 2018. As the town began to fill, far sighted individuals started a conservation movement to set aside natural open space for future generations. The video highlights each of the Town’s natural open spaces and shows the date that conservation efforts for a particular area began. 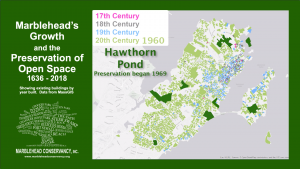