Oriental bittersweet was introduced into North America in 1860 and has spread widely, principally with the help of birds, animals, and humans. The berries that appear in the spring will later become an attractive feature of the plant as well as food for birds and animals.

In the fall, oriental bittersweet can be quite attractive. At that time of year the outer covering of the berries turns yellow, and, as these husks split open, they reveal a red-orange berry. Because the color combination is so attractive, people cut off branches to use in floral arrangements. Unfortunately, the berries are often disbursed when the arrangement is thrown away, helping the spreading of the vine. Because the vine is aggressively invasive, its sale in Massachusetts is now forbidden by law. 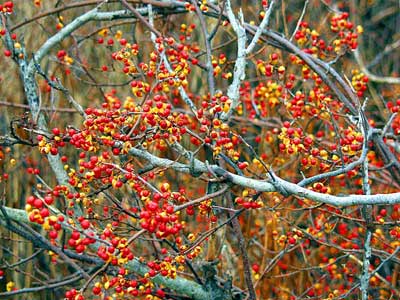 The yellow husked bittersweet fruits are about 1/4 inch across, appearing from July to October. The yellow ovary walls begin to fall from the fruit after the first frost. The fruit splits open at maturity revealing three red-orange axils that contain the seeds.

Like all living things, bittersweet serves a purpose in the ecosystem. It provides food and shelter for some animals. Its web-like root system also helps stabilize soil on steep slopes.

Despite providing some benefits, bittersweet tends to run out of control to the detriment of the forest around it. It thrives best in sunny areas, but also survives in deep shade. In Marblehead, it can be found almost anywhere, but is most invasive in the Hawthorn Pond, Forest River, and Steer Swamp conservation areas. It is also widespread along the Path that follows the old railroad bed.

Bittersweet damages other plants in a number of ways:

*The vine girdles the plants, cutting off their circulation.

*The weight of the vines causes branches
and entire trees to collapse from the weight, especially during snowstorms. 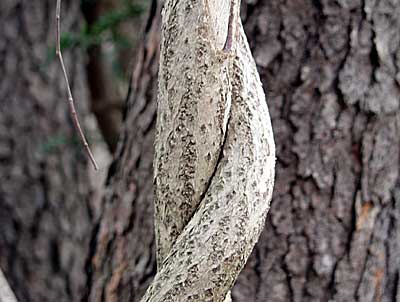 Bittersweet is a deciduous, woody, errenial vine. The brownish vines have been found to grow in Marblehead as much as sixty feet long and over seven inches in diameter! The stems have a dark brown to brown-striated bark. Twigs are dark brown, brown, or light gray and are smooth and hairless.