Seeds of the Japanese barberry were imported from Russia and planted in the Arnold Arboretum in Boston in 1875. By 1920 U.S. nurseries were promoting the plant as an attractive alternative o the more common European barberry, brought over earlier for use as hedgerows, dyes, jams, and medicinal purposes 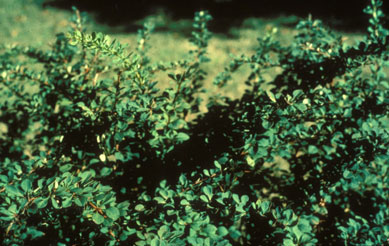 Japanese barberry is a rugged plant, adaptable to various soils and climates, and has no serious problems with pests. As a result, and with the promotional assistance of nurseries, the plant has spread widely. Its dense thicket blocks the growth of other species leading to a monoculture.
Citation – Richard Webb, Self-employed horticulturist, Bugwood.org

Berries of the shrub, typically ½ “ long, hold to the branches for much of the winter. Although not very nutritious, they are a late winter food source for birds when no others are available.
Citation – Leslie J. Mehrhoff, University of Connecticut, Bugwood.org 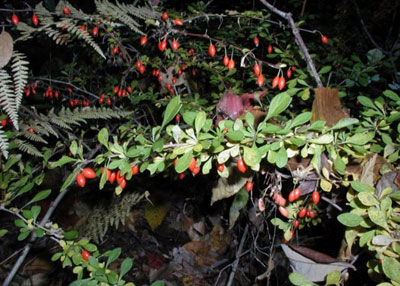 Branches of the Japanese barberry have a brown bark covering a yellow wood with sharp single spikes growing from every node.
Citation: Barry Rice, sarracenia.com, Bugwood.org 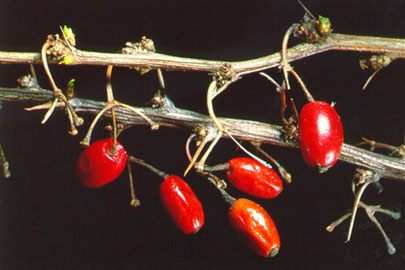 As with some other invasives, Japanese barberry has useful characteristics, notably the reasons for its first import. However, it propagates easily. The woody branches will root wherever they touch the ground and the seeds, which can remain dormant in the soil for ten years, are transported by birds. These shrubs are found in all of Marblehead’s conservation areas.