Japanese Knotweed is a robust perennial herb that emerges in early spring, growing and spreading to form dense thickets as much as nine feet in height. The first plants to emerge in springtime have a reddish-purple appearance that soon gives way to green. Lateral spreading of growth occurs by rhizomes that may be as much as a meter below the suface. The plant is native to eastern Asia and was brought to North America most likely for ornamental planting in the late nineteenth century.

Japanese knotweed is most commonly found in moist open areas such as riverbanks, but the plant adapts to dryer soils. Thickets of knotweed may be so dense that all other plants are shaded out. A mature plant will have a large root ball at its base, with lateral spreading rhizomes and a tap root that may extend as much as three meters below the surface.

The plant can also reproduce by seed, following flowering in late summer.

Small segments of Japanese knotweed roots have been known to regenerate when buried as much as one meter deep. A root mass at the base of a mature plant may have a taproot with as much penetration into the soil. As a result, mechanical removal doesn’t offer much hope of success. However, a local experiment in control has shown that shading the plant inhibits its growth. 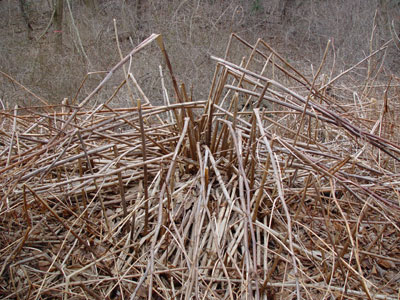 At the end of a season, a mass of dead stems remains that further inhibits native plant regeneration and leaves river banks susceptible to erosion as well as to flooding.