Kudzu is a climbing deciduous vine that is native to Asia and was first introduced into America in 1876 at the Philadelphia Centennial Exposition. It was widely planted throughout the eastern United States in an attempt to control erosion. The vine is capable of reaching lengths of over 100 feet, growing at a rate of as much as one foot each day. Kudzu’s preferred habitat is open, disturbed areas such as roadsides right-of-ways, forest edges, and old fields. New England winters have been considered too harsh for the vine to survive, but a few sites in Massachusetts, including two in Marblehead, have been found. Kudzu often grows over, smothers, and kills all other vegetation, including trees. For this reason, steps have been taken to eradicate the plant wherever it is found.

Kudzu has three-parted leaves with large broad leaflets up to four inches wide, although the three parts may not be fully developed. 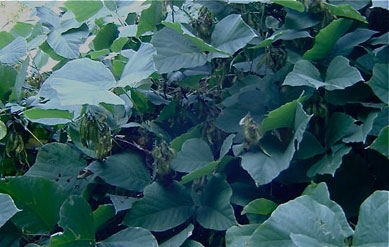 Vines running along the ground tend to run straight until they touch an obstacle. Nodes form along the vines every 8 to 12 inches and can put down roots or launch aerial vines. Removing the nodes is a way of stopping further growth. 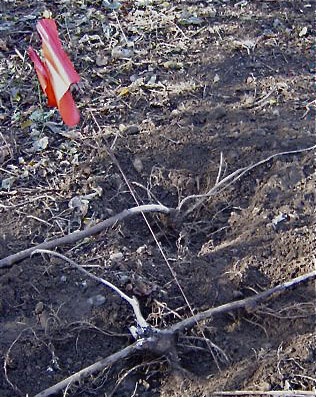 In Marblehead, kudzu’s flowers bloom in late August through early September, followed by the formation of seed pods. Cutting the vines from their roots at this point in time will minimize the storage of energy in the roots for the winter.

PDF kudzu presentation – A report to the state on eradication of kudzu from one of two sites in Marblehead.  Click to download Kudzu PDF