Phragmites, or common reed (phragmites communis) are tall plants that grow in large colonies such as those found at the back side of Goldthwait and at Hawthorn Pond. Its appearance and spread in an area is usually indicative of a disturbance to the landscape. Spreading by extending rhizomes, the plant forms a dense mat that prevents other plants from growing. Its long slender leaves appear in early spring among the dead stalks of prior years, although the beginning of the emerging new stalk could have been found below the surface of the ground even before winter had set in.

Common reed is a native of the Americas and Eurasia but the invasive form that is taking over U.S. wetlands originated in Europe. The native form of the plant is less dense and generally smaller than the European form.

Aerial stems arise from joints in the spreading rhizomes, and aerial shoots that are knocked over can take root and produce new shoots at the nodes. Rootstalks can exceed twenty feet in length and tangle themselves into a mat blocking other growth.

Plumes of the phragmite are six to twelve inches in length. First appearing as purple flower heads, they turn gray and fluffy in late summer. 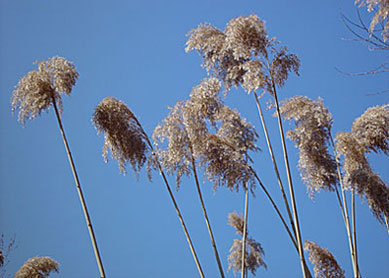 Once established, the buildup of litter from previous years of growth prevents other species from germinating or establishing. 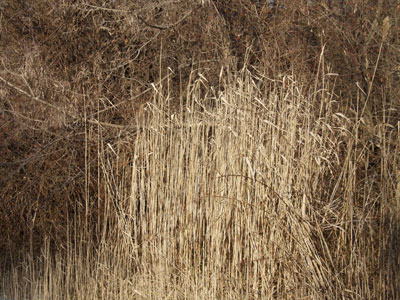 The reed has a sensitivity to saltwater, though it may grow to the edge of a saltwater marsh. Locally, Salem Sound Coastwatch has a project underway assessing different control ideas.